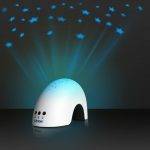 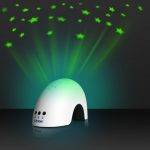 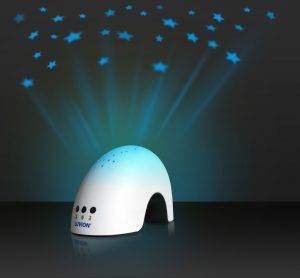 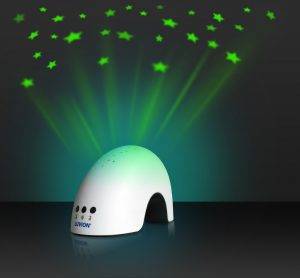 This Luvion star projector night light conjures up a beautiful and soothing starry sky in every baby’s room. Soothing lullabies can be set to 10 or 20 minutes with the automatic timer. You can choose to use only the star projection, just the songs or both at the same time.

For the star projector night light the LEDs turn into multiple different colours creating a beautiful starlit sky within the baby room! You can choose to see the sky in one static colour, choosing between blue, green and orange. Or you can leave the lights to flow gently between the different colours creating a beautifully enchanting starry sky. The star projection has an automatic 45-minute timer allowing your little one plenty of time to fall asleep before turning off automatically and conserving the batteries.

Along with or separate from the star projection you can also use the projection Arc to play a soothing lullaby to calm the baby. You can set an automatic timer that lets it play for either 10 or 20 minutes before automatically turning off.

The Luvion Projection Arc runs on 3 AAA batteries (not included).

There are no reviews yet.