Luvion is a specialist in the field of baby products, all our products aim to make your life a little easier as a parent. Our bottle warmer also takes care of this, we have bundled all the features that are necessary for a good bottle warmer in our Eco Fast Deluxe to develop the best bottle warmer possible.

Even when the breast milk is frozen, you can simply use a bottle warmer to thaw it and then heat it to the correct temperature. When the little one is a little older, you can also use it to reheat frozen baby food.

In addition to heating or keeping bottles warm, you can also use the Eco Fast Deluxe to sterilize the bottle after to kill harmful bacteria. For this purpose, a sterilization cap is included with the bottle warmer to make it airtight. The warm moist air then circulates around the bottle or pacifiers to sterilize them. 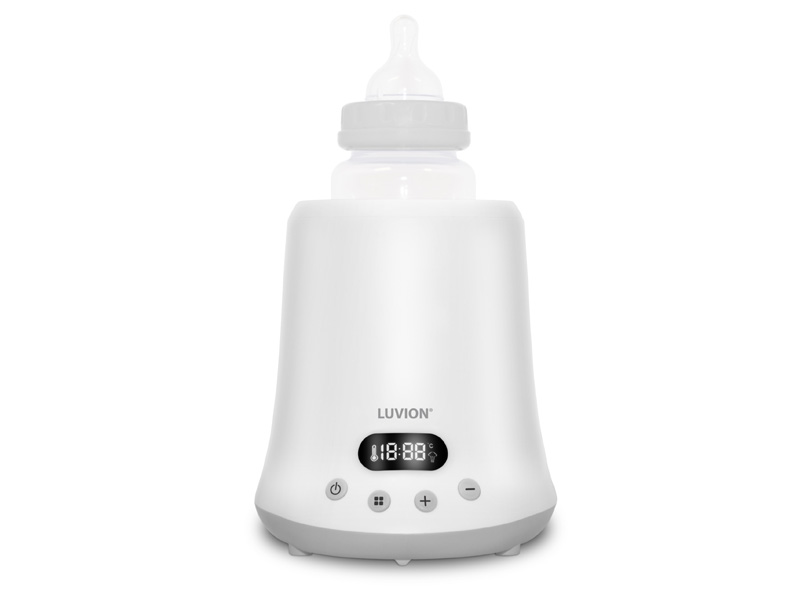 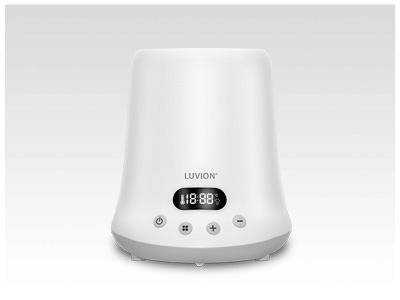 The 4 in 1 bottle warmer Luvion Eco Fast Deluxe is able to heat a bottle to the desired temperature very quickly due to its high power. In addition to the quick bottle heating function, it has 3 other very useful extra functions. A keep-warm function to keep a bottle warm if you do not want to give it immediately or if you maybe want to keep the leftovers for a while. The third function is a sterilization function to kill harmful bacteria in or on the bottles and soothers in a convenient way. Finally, you can also use it to thaw frozen breast milk or other food while retaining all-important nutrients.

The main function of every bottle warmer is to bring the baby milk to the right temperature, because of the high wattage (500W) the Luvion is a very fast bottle warmer. The exact time of course also depends on the starting temperature and the amount of milk you want to heat up, but in almost all cases the bottle is up to temperature within 5 minutes.

The Eco Fast Deluxe is very suitable for both breast milk and artificial powder-based baby food, even when breast milk for example, is frozen, because the defrost function allows you to use it to first defrost the milk and then to bring the bottle to the correct temperature (30-35C °).

How does the bottle warmer work?

The bottle warmer works similar to a electric kettle, the bottom plate heats the water inside so that the bottle that is hung in it with the bottle basket is then gradually heated to the correct temperature, this way the nutrients present in the milk are optimally preserved.

Via the LCD display you can set the desired heating time, the timer will then count down to zero and then switch itself off automatically, below as an indication a table with the heating times. However, the exact time also depends on the initial temperature and the material of the bottle among other things.

After the bottle has reached temperature, you can also use the keep warm function if you do not want to use the bottle immediately and want to keep it at the perfect temperature.

Sterilizing or boiling teats and bottles

In addition to defrosting, heating and keeping warm, there is also a sterilization function to sterilize both bottles and teats. Regular sterilization ensures that harmful bacteria are killed. As your baby's immune system is still developing, this is important in order to prevent the little one from getting sick.

Boiling or sterilizing the bottle, how often and for how long

The recommended frequency of sterilization varies greatly and opinions on this are still developing, previously the recommendation was to sterilize or boil out daily for the first six months, now it is often said that once a week is sufficient.

To kill all bacteria, it is recommended to sterilize or boil for about 8 minutes.